Gael Hannan is advocate, author and speaker who grew up with a progressive hearing loss that is now severe-to-profound.

Although she was diagnosed at age three with a sensorineural loss, Gael’s specialists told 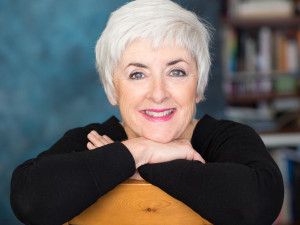 her parents that a hearing aid would not help her. Gael kept asking and, switching doctors at age 20, she had her first hearing aid within a month. Life immediately changed.

For the first time, and for answers that were beyond her own experience, Gael reached out to others with hearing loss. When she contacted a hearing organization, life changed again. With one baby step and one baby, she entered the world of hearing loss advocacy and activism. Hearing loss is now a passion and a career.

At the 1995 Canadian Hard of Hearing Association conference, Gael met other people with hearing loss and realized that many had difficulty expressing how their disability affected them. Gael approached her close friend Dalene Flannigan, a fellow actor and a brilliant writer, to write a one-woman play that would creatively convey the impact of hearing loss on a person’s life. The result was Unheard Voices, a dynamic one-woman show that looks at hearing loss from the point of view of adults, children, service providers, men, women.

From its very first performance, Unheard Voices has inspired a passionate response, from audiences that include hard of hearing, deaf and ‘hearing’ people. As one young Newfoundlander said after seeing the show, “you walked through my life”. Since 1999, Gael has performed Unheard Voices to thousands of people around North America and in New Zealand.  Her repertoire has expanded to include other monologues, spoken poems and rap songs, and a performance workshop, Ear Rage! Gael also presents a number of informational workshops for both consumer audiences and the business world. She is regularly invited to deliver her and performances that raise the bar on awareness of hearing loss issues.

Gael is a past Director on the national board of the Canadian Hard of Hearing Association (CHHA). She is a speechreading instructor and volunteers for many hearing-related programs.  She developed the Hearing Foundation of Canada’s Sound Sense hearing awareness program which is delivered to elementary students across Canada, and in 2002 she created a national awareness campaign on infant hearing screening for the same organization. Her articles and reviews have appeared in magazines such as Hearing Health, Vibes and Abilities. Gael also wrote employment-related manuals for both the Canadian Hard of Hearing Association and The Canadian Hearing Society.

In 2011, began writing a weekly column for the renowned website HearingHealthMatters.org.   She also writes consumer a column for Canadian Audiologist.  After years of talking about doing it, in May 2015, Gael published her first book The Way I Hear It part memoir, part survival guide. Her second book, Hear & Beyond: Live Skillfully With Hearing Loss, is a skills-based aproach to hearing loss written with Shari Eberts, and will be published in May 2022

She has received several awards for her work, including the  Consumer Advocacy Award by the Canadian Association of Speech Language Pathologists and Audiologists, and awards from the Canadian Hard of Hearing Association. Gael and Doug, the Hearing Husband, live on Canada’s west coast.

Book -The Way I Hear It 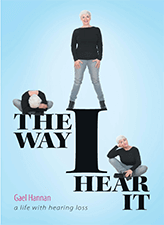 Join us for an exciting hearing health fair. I will be speaking – more details soon!

Vancouver – if you’re a teacher for children with hearing loss, join us for an exciting day.

If you happen to be in Finland in October 2018…. Details to be confirmed, so watch for more information.

I will be presenting at the CHHA Comox Valley Branch on Vancouver Island at 7pm on October 19th.  Book signing and snacks.

It was a great meeting people with hearing loss in North Vancouver.  Thanks Hugh and Mike!

May 25-27, 2017!  Mark your calendars for a fabulous event in beautiful British Columbia. The Canadian Hard of Hearing Association is holding its national conference in  the town where I live most of the year – Sidney, BC on Vancouver Island! Come visit!

September 18, 2016: Speaking at the opening of this event in Vancouver, BC, drawing hearing health professionals from around the world.