How’s my life going with a cochlear implant (CI)?

Well, for starters—although I can’t speak for other recipients—it’s a lot LOUDER.

But at only 32 days since activation, most familiar sounds bear little resemblance to how I hear them acoustically through my hearing aid. The voices of strangers sound curiously alike, as if they’re crying while they speak. What I hear do hear clearly, however, are those high frequency sibilant sounds. Think of the hiss of snakes and steam and the grocery checkout woman who asks “do you want bagss-SSS?”  I groan f I’ve forgotten my sound-less cloth bags in the car; paper bags are noisy enough, but the loud crackling of plastic bags has become my Most Annoying Sound ever. In Wired for Sound: A Journey into Hearing, my friend Bev Biderman writes about her surprise at their harshness—she had expected that they “rustled softly in peace.”

On the plus side, I can hear butter melting in a pan—yes, yellow makes a sound! I hear water running in a sink which lessens the chance of my flooding the kitchen again. And after years of theatre-going, I now understand the fuss about people opening candy wrappers during the show. I hereby apologize to anyone, ever, who has suffered because of my oblivious, thunderous opening of candy and chips at the movies.

I’m also hearing lots barmping. ‘Barmp’ is what Newfoundlanders do when they lean on their car horn. Say ‘barmp’ out loud, drawing out the “arrr”. What you just said—ba-aar-rmp—perfectly describes what I’m hearing through my CI.

Louise, my sister: The fridge coming on.

Louise:   Dad listening to the obituaries on the radio. (Loudly. With organ music. But he’s 90 and losing friends fast; who’s going to ask him to turn it down?)

Me (in the car with the Hearing Husband):  Whazzat?

There are exciting moments when I identify a sound all by myself. On a walk with the Hearing Husband, I heard a chittering sound, like birdies over there in the bushes. He said no, look up, it’s Canada geese flying over. I said I could hear them barmping, this was something different. He listened—and there were little birdies in the bush. Score one for Gaelie!

Continue reading this article on the Better Hearing Consumer….

As we human beings grow up, we get bigger, hopefully better, although never perfect. Nature likes to throw curve-balls, forcing us to adopt exercise or medicine or body adjustment changes to recover and improve our well-being.

Some of us actually transform into semi-technical creatures. In order to hear, I’m a battery-operated person with my hearing aid and electrically-powered with my cochlear implant. This electrode array in my cochlea has turned me into a computer; I have stuff operating inside my head! In this computer, the Cochlear technology is the hardware—and I’m the software; I control my own hearing success through a variety of communication strategies.

So—what do I need to understand?

So—who and what helps us to learn all this?

Continue reading this post on The Better Hearing Consumer….

A group of geese is called a ‘gaggle’ and cows form a ‘herd’. So what do we call a group of cochlear implant users?  A “cockle”? A “CI-heard”?

I don’t know, either, but recently I attended a very large gathering of electrically-operated people who, like me, have electrodes inside their heads and processors on top of them. And every single person in that cockle-heard, whether or not they understand it, was grateful for the technology (and to the people who created it) for returning a sense of hearing they had lost, or never fully had.

Cochlear Celebration was quite the party—but not the crazy-party bash like March Break in your university days. This was a well-orchestrated event that combined information sessions, technology demonstrations, cheerleading and candid, impromptu talks with people who know more than you do. It also inspired at least one personal, important aha moment.

There were 1000 of us at the Cochlear Americas event: CI and Baha recipients of all ages (and I mean all ages, from kids to the elderly), their favorite hearing people (spouses, friends, children, parents and whatnot) and Cochlear staff, who had convened in Orlando for three days. (If you’re going somewhere in the middle of winter to talk about reclaiming lost hearing, there should be palm trees, right?) The focus was simple: cochlear implantation and its positive and profound impact on our lives.

When I finally met other people with hearing loss, the lights went on, fireworks exploded, and angels danced. It was like falling in love – but with a group of people, with a new awareness and with a new me.

Continue reading this post on The Better Hearing Consumer…

February 6, 2017, just one day out of my life, but with so many expectations hanging on it that I was reluctant to get out of bed.

Three weeks and four days after my cochlear implant (CI) surgery, this was the day of “switch on”, the activation of the device – and potentially the dawn of a new hearing life according to the messages of encouragement I’d been receiving for months from people who had been implanted.  You won’t believe how your life will change, the new world ahead of you, they wrote.  It was a very high bar.

My family and friends were also looking forward to the activation. These were the people who live with my hearing loss, who repeat half of what they say to me, who speak louder or softer depending on my requests, who point out sounds that I need to hear (car coming!) and who let other sounds, unimportant to the moment, simply pass me by. These are my hearing people who are hoping that, soon, I might be able to hear like them.  An unbelievably high bar.

I . As we drove to the hospital for the appointment, I settled on middle-bar expectations. At one end of the scale, I felt confident I would hear something, like bells, whistles, beeps. At the other end, I know people who were using the phone almost immediately. But I wasn’t planning any phone calls that day with the new processor. My goals were simple: learn how to get the Kanso Sound Processor on and off, hear something, and maybe—dare I hope for this—to understand what people were saying with the help of speechreading.

The Hearing Husband and I crammed into the audiologist’s office. Doug was filming the activation; he was so excited that I hoped he could keep the camera steady in the event of any big, teary aha moment. My other worry was that I’m a public speaker and actor, and my sort tend to perk up and ‘perform’ when there’s a camera or audience; I wanted to be honest and focused on the activation, not the creation of an emotional Facebook video.

Ah, my beautiful new processor; since I had last seen the dummy version, the Kanso had grown—in my mind—to the size of a free-run dinosaur egg, but in reality it was like a small, flat chicken egg. After we practiced turning it on (easy) and off (slightly less so), my hand moved the device slowly to the general area of slight swelling on my head. My fumbling was short-lived because when the Kanso gets close to that sweet spot, it almost jumps into place—the magnets are powerful.

All 22 electrodes in that “perfect 1 ½ turns” had reported for active duty; this was good news. Setting the volume level turned out to be the most difficult task of the day, because my tinnitus was in full swing. Rebecca ‘played’ a series of either beeps, and I had to hold up the corresponding number of fingers, 2, 3 or 4.

I can’t speak for all people with hearing loss, but in hearing ‘tests’, many of us operate with our darker nature—we try to cheat. There are many reasons, but it boils down to not wanting to give the wrong answer, or to prove we don’t have hearing loss after all. But here I was, demonstrably deaf and recently implanted—there was no reason to hide what I could or could not ‘hear’. Still, I wanted to hold up the correct number of fingers, regardless of what I heard.

The first few beeps went well. But then they got quieter and my tinnitus got louder, so I started wiggling a few friendly fingers at her in the hope that she’d see the correct combination.  She’d ask, “Is that 3 or 4 fingers?” and I’d reply “yes.”  But Rebecca is used to people like me and she managed to get an accurate reading. 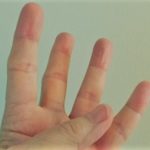 Read the full article here on the Better Hearing Consumer….

Are you one of those people who never looks back, who never second guesses a decision?

Well, I’m not. In the 14 months between saying let’s do it and actually having my cochlear implant, I did not regret my decision. But when people asked me if I was excited about the cochlear implant, I always said not yet. It didn’t seem real; I couldn’t imagine being on the other side of activation day, the day when I would start hearing with my new device.

But now it’s in progress. Surgery—been there, done that. Activation—two weeks from time of writing. Rehabilitation—ongoing, with expected lifelong improvement. And still, no regrets.

My family and friends have supported my decision from the beginning. The Hearing Husband isn’t the kind of man who sits and dreams about what could be; if something can help, let’s do it. My father, almost 90, quietly follows and cheers on my progress (while limiting his own hearing aid use to daily card games with his lady friend). And I received a strong gust of girlfriend-support at a snowshoeing getaway a few days before surgery. At the final breakfast, my best friends pulled up their sleeves to reveal supportive but temporary cochlea tattoos that echoed my real one.

How could I not succeed with this kind of love and support?

The surgery aspect of implantation may be intimidating for many people and others view it as invasive, but I see it differently.

If I hadn’t had several foot surgeries when I was a child, mere walking would always have been painful. Without a caesarean section, my baby and I might not have survived. Surgery that saves, repairs or corrects is not invasive, but necessary. Many deaf people choose not to have surgery because they don’t require ‘fixing’ and I deeply respect that opinion. But my language has always been the spoken one and I was struggling; I chose cochlear implantation to improve my communication—doing better than ever would be nice, but I’m trying to manage my expectations.